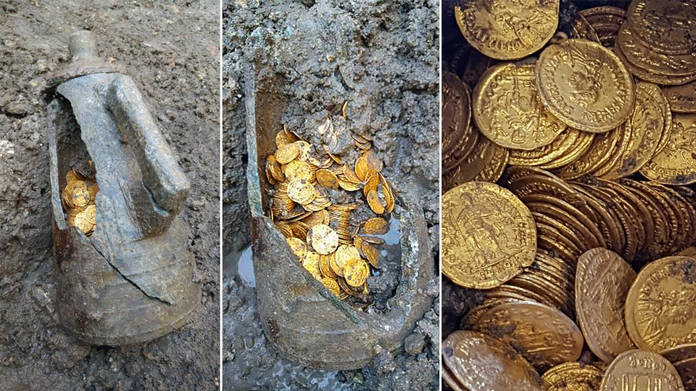 Roman Coins: An exciting archeological find in Como, Italy just north of Milan was announced in September of 2020 by the Italian Minister for Culture.

In the basement of a theatre being renovated, the workers stumbled upon what they thought was a large soapstone jar that, after examination from scientists, turned out to be amphora filled with stacked gold coins worth millions of dollars.
The coins were a surprise to the experts as large jugs with handles on either side, amphora, usually held wines and foodstuffs for the Romans. According to npr.org, the Roman coins show the images of emperors Honorius, Valentinian III, Leon I, Antonio, and Libio Severo all before 474 AD.

The images of the emperors will help to correct any modern assumptions as to how they looked and help scientists to learn more about this turbulent time in Italy.

The Como theatre in which the discovery was made, Teatro Cressoni, was built in 1870 and saw life as a residential home and a cinema before it was abandoned in 1997. The theatre was being renovated to turn the building into apartments, according to newsweek.com.

Secret Swimming Holes Around the World You Need to See

December 18, 2020
This celestial phenomenon tops our bucket list for a reason.

Visit Grotta Palazzese in Italy – a Restaurant Inside A Cave

The 7 Most Beautiful Places to See in the Most Dangerous...

Top 10 Most Luxurious Hotels in the World

Top 10 Greatest Travel Experiences from Around the World

Top 10 Best Places in The World for Quality of Life